Anyone who comes to Belgrade these days can see new buildings everywhere and feel an air of economic boom: more and more cars, always newer and more luxurious, caught in increasingly frequent traffic jams; crowded restaurants, with a very flexible interpretation of physical distancing rules, which only accept weekends from customers who have booked days in advance; endangered stationary and free taxis, compulsively searched with parallel phone calls to several company switchboards and tracked down the streets as if they were white rhinos; shopping centers overflowing with window-shopping as with international customers, defying the Covid by brandishing credit cards, boldly and without protection.

Official figures confirm this feeling of growth: after having succeeded twelve months earlier in containing the economic shock of the pandemic to -6.3%, (while countries like Italy and France fell to -18%), in the second quarter of 2021, the Serbian economy grew by 13.7%. This is the highest growth rate since the distant fourth quarter of 2001, when the liberalizations and privatizations that followed Milosevic’s fall seemed to put the country back on a fast track to return to the global economy. This was not the case, however, and instead the country endured nearly two decades in which hopes for growth were postponed as the impacts of global crises were occasionally felt. Now is the right time, and could Serbia really embark on a phase of sustainable economic expansion?

Serbia, “the new economic tiger of the Balkans”? 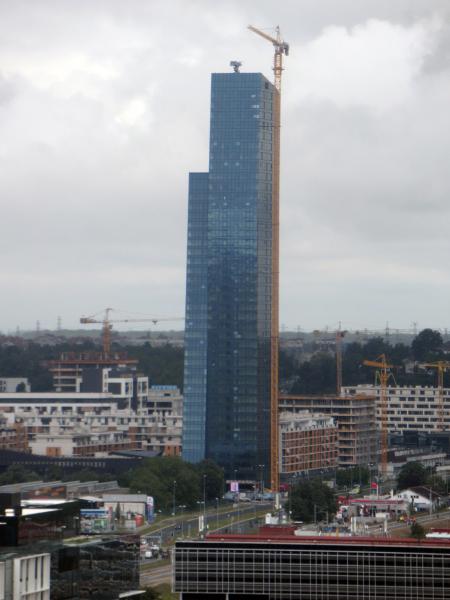 The tower of the West65 complex in Novi Beograd is 155 meters high and has 40 floors.

What is certainly striking is that the economy which for years has been “exported”, that is, based on the attraction of foreign industrial investment in manufacturing industries and related exports, has recorded an increase in household consumption of 17.6% in the second quarter of 2021 (-1.7% in the first quarter of 2021), which corresponds to the jump in fixed investments to 22.5% (+ 9% three months more early), while government spending fell 3.8% (-0.6% in the first quarter). If we look at the sectors that make up this growth, we immediately notice that trade grew by 33.3% compared to Q2 2020, when it fell by 15.9%. Professional services (+ 30.9%) and recreation (+ 35%) recorded increases that were roughly equivalent to the roughly similar decline over the same period last year.

But the real engine remains construction, which in the second quarter of 2020 fell only 2%, while in the first two quarters of the year it remained at 17.7%. In September 2021, 3,455 building permits were issued (including 85% for buildings), 39.4% more than the 2,479 issued twelve months earlier. It goes without saying that Belgrade dominates the sector: around 16.25 billion dinars (around 138 million euros) is the expected value of construction works authorized from September 2021, or 30.7% of the total of approximately 460 million euros. These figures seem to reinforce optimism about the capacity of the Serbian construction sector to respond to Covid and indeed to attract foreign capital to fuel this growth.

The 6.5% growth forecast by the EBRD for this year now appears to be cautious and preliminary figures, while a GDP forecast of + 7.4% in the third quarter seems to confirm new ambitions. Serbia has become the most dynamic economy in South East Europe and intends to remain so for years to come. Could the hidden dream of many Serbian politicians to achieve Croatia’s GDP in 2023 really be within reach?

In fact, this unprecedented growth, at least in size and intensity, is also raising new concerns in the country. What worries Serbian citizens most is inflation. What worries entrepreneurs is the labor shortage.

Let’s start with the first one. In October, consumer prices rose 6.6% from twelve months earlier, the highest value since 2013, with an increase of even 0.9% from the previous month. The cost of transport is also increasing (+ 1.8% in one month), as are the prices of shoes and clothing (+ 1.6%) and food (+ 1.3%). In 2021, groceries have so far become 8.7% more expensive than the previous year, and it is easy to imagine that the 10% threshold will be exceeded, especially due to the increase in prices of the meat, fruits and vegetables.

In the capital, the values ​​are greatly amplified compared to the rest of the country and a price increase of even more than 10% is more than a widespread perception, in the absence of official data. The price evolution of agricultural products of Serbian origin is also impressive, up 24% in twelve months, with a peak of 58% for fruits and 29% for vegetables produced in the country. In July, the average monthly expenditure of a Serbian family was estimated at 76,689.07 dinars (+ 4% in one year) against an average national net salary of 64,731 dinars. Rising inflation obviously has an impact on wages, which have been rising for years. While between 2009 and 2016, the Serbian gross minimum wage, which attracts so many companies looking for cheap labor, was stable (233 € in December 2008, 230 € in December 2016), during over the past five years, it has increased by more than 50% to € 370. The surge in this minimum value has spread to all salary brackets. In Belgrade, the average net salary has been around 15,000 dinars above the national average for years, reaching nearly 80,000 dinars net.

Foreign entrepreneurs, especially small and medium-sized enterprises which have opened production facilities in recent years, attracted by low wages, are looking and in some parts of the country they cannot find any more workers. In a country that for years has been promoted and sold by Serbian Chamber of Commerce for its “high quality and cheap” labor, it is now difficult to find “affordable” employees. With many construction sites in Belgrade offering specialized workers 900 euros net, foreign entrepreneurs and managers end up resorting to workers from the south of the country who agree to work for food, housing and minimum wage, or they try to set up a subcontracting. system, tracking down factories in the most disadvantaged areas that can guarantee certain basic operations at competitive costs. The point is that the country is experiencing a steady decline in the unemployment rate, which has fallen below 10%. 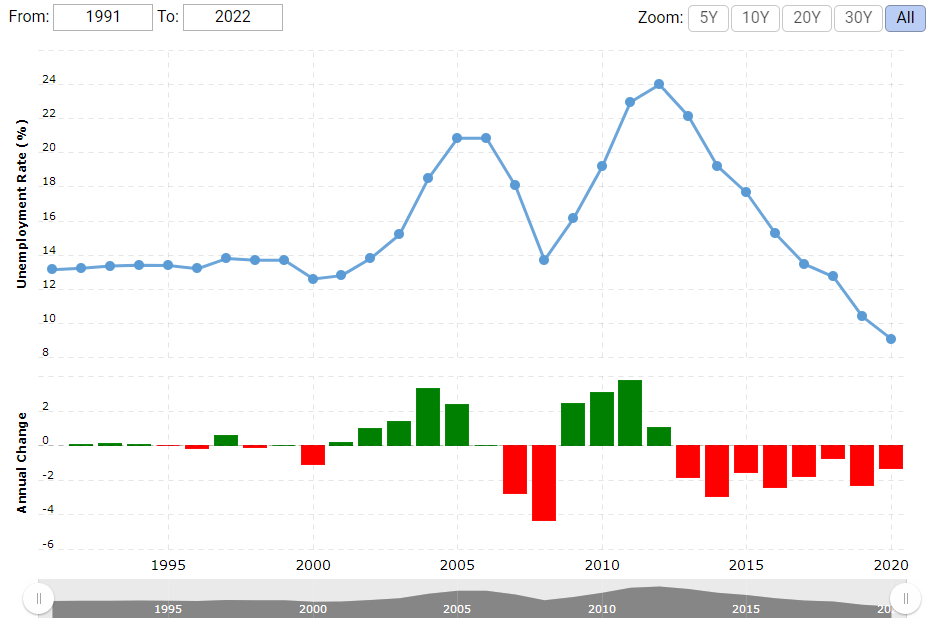 Evolution of the unemployment rate in Serbia. Source: World Bank

To superficial observers, the situation seems to recall the Italian economic boom of the 1960s and 1970s, when, alongside the large national and foreign companies that dominated the high-tech sectors (automotive, chemicals, metallurgy, etc.), small and extremely flexible family businesses have flourished and have thus been able to respond quickly to the delivery and cost requirements of their customers. But it is always a mistake to compare different historical periods: relying on a few analogies is both a mistake and a sign of laziness because the economic development of a country does not follow specific phases or periods.

The hyper-technological structure of the Serbian Expo pavilion is intended to recall the constructions of the prehistoric site of Vinca.

Towards a new development model?

There are serious doubts about the duration and robustness of this growth. The current growth rate is driven by the construction sector, a typical engine of economic development which in turn drives manufacturing, imports and therefore logistics. But it is a very cyclical sector, which often suffers from severe recessions that burn a large part of the value of real estate. The Serbian government is trying to make this construction boom, concentrated mainly in the capital and in Novi Sad, last as long as possible by adopting a strategy of attracting investment in the sector as “easy going” as Dubai. In some respects, this is a compulsory choice, not only to maintain the current growth rate, but also to allow more time for the attempt to transform the domestic production structure, in order to become accredited as a as a country of innovative production and technology and no longer as a country of labor-intensive production and screwdriver factories. The same effort was made at the Dubai Expo, under the slogan ‘Connect minds, create the future‘, aiming to present a country on the path of digitization, creative enterprises and high value-added production. In essence, the challenge is to move from an exogenous development model, based on the attraction of foreign investments in search of cheap labor, to an endogenous development model, through technologically advanced companies. based in the country and closely linked to global innovation hubs.

But intellectual emigration, the demographic crisis and the crisis in public education are some of the factors that can challenge this vision.

Did you find this article interesting? Please consider supporting our website by clicking here.

This article is also available in: Italian